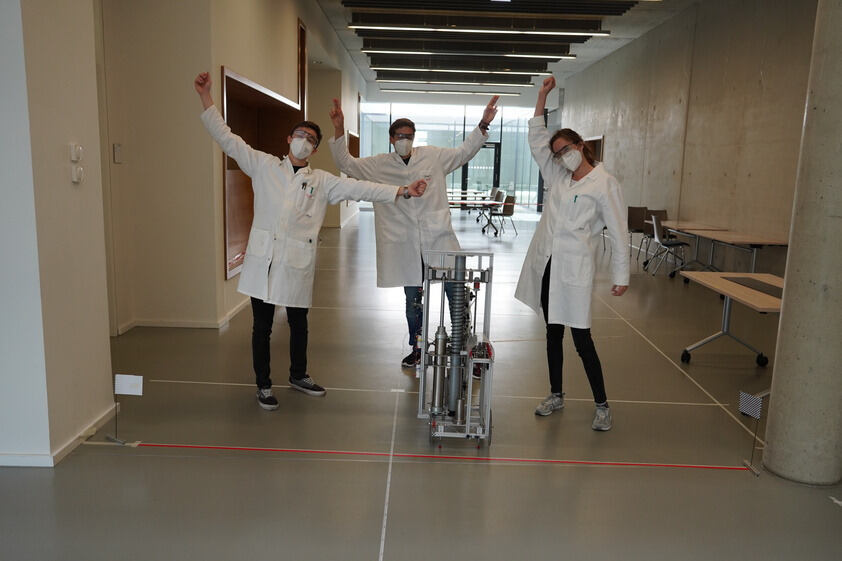 The chemical wheels are spinning again. This year, the VDI ChemCar competition took place as part of the European Congress of Chemical Engineering (ECCE) on September 22nd. In addition to the exciting conference program, the ChemCar competition is known as the highlight of the congress. Due to the Corona pandemic, the congress could only take place digitally. Therefore, the ChemCar competition was also held digitally and decentralized again this year. In addition to the German teams from TU Dortmund, the University of Ulm and RWTH Aachen University, four international teams from the universities of Bandung, Surabaya and Negeri Semarang from Indonesia and the Iranian team from Amirkabir also took part.

The goal is to develop a chemically powered vehicle (ChemCar) and to cover a distance between 8 and 17 meters as accurately as possible with an additional weight of up to 30%. The teams develop innovative driving, reactor and braking concepts which are evaluated in three categories: creativity, safety and accuracy.

To start the ChemCar, the reactants hydrogen peroxide and potassium iodide are mixed for a pressure reaction and a sodium acetate trihydrate crystallization is triggered in a tube. Two photoelectric sensors are located along the crystallization tube, each of which switches a valve when activated. The resulting pressure compresses a compression spring with the aid of a pneumatic cylinder, which temporarily stores the chemical energy. Shortly before the spring is fully compressed, it couples with a toothed rack, which is connected to the drive shaft via a gear. Switching the first valve opens the outlet of the cylinder, so that the cylinder no longer offers any resistance and the spring can return to its original position. This drives the rack and the ChemCar starts to move. Triggering the second photoelectric sensor switches the brake valve, which directs pressure into two brake pistons that lift the drive axle, bringing the vehicle to a halt. The wheels of the ChemCar lose ground contact and continue to rotate in the air until the spring is released.

The Aachen team "Spring O2'clock" excelled this year with a creative and safe concept and was thus in second place before the race. The concept also included a clockwork mechanism on the gearbox, which was supposed to ensure a constant speed of the ChemCar. However, this could not be implemented in time, which is why the ChemCar accelerated continuously during the race. Nevertheless, the Aachen ChemCar drove very reliably in the race and crossed the finish line by only 28 cm. Only the "Spectronics" team from Indonesia managed an even more precise run. In spite of the strong competition, the Aachen team "Spring O2'clock" won the first place in the overall ranking. Second place went to the "Spectronics" team from the University of Surabaya (Indonesia), followed closely by the "pHantasticCar" from the TU Dortmund.

The ChemCar competition was supported by the following sponsors this year: BASF, COVESTRO, Evonik, INBUREX, Lonza, Merck and YNCORIS. We, the team "SpringO2'clock", would like to thank the team of the mechanical workshop of AVT (J. Bouge, N. Bouge, J. Schornstein, A. Lehmann, J. Urbaniak), our safety officer K. Faensen and the 3D-Lab (C. Schmitz) for the excellent support. We would also like to thank the kjVI for the smooth organization and our sponsors the HANS HERMANN VOSS STIFTUNG, büchiglasuster and the RWTH Aachen University profile area Molecular Science & Engineering (MSE). We look forward to seeing more innovative concepts at the next ChemCar competition in 2022.